A park in Harold Street, Newtown is called The Isabella Hill Rest Area.  It is named after Mrs Isabella Hill, who lived at 71 Union Street from the 1940s to the 1960s.

“The park was originally much smaller than it is today, taking up empty land on the site of Spencer Behag’s corner store at 75 Union Street.  In the late 1970s the park was extended when a former warehouse and two semi-detached brick houses at 4-18 Harold Street were demolished…”

The modern-day map, courtesy of Google shows us the vicinity of the park and the approximate position of Mrs Hill’s house which was near the corner of Union Street and Harold Street.  The City of Sydney Archives has made available a picture of the house that was taken between 1977 and 1980.

The sign in the park also says that the park is, “on the southernmost portion of the former Gowrie Estate which was subdivided and offered for sale in 1878”.  The sign displays a copy of an old Real Estate Agent’s map of the estate, which confirms it.

There seems to be something missing from this story. The sign in the park has mentioned the Gowrie Estate, Mrs Hill’s house and her next door neighbour, Spencer Behag.

But who owned the warehouse that was demolished?

The land records that are freely available online from the NSW Land Registry Service website indicate that on 11 July 1964, a large block of land in Harold Street was transferred to Grandoon Estates Pty Ltd.  The previous owners had the surname Gurrin. Frederick Moffatt[1]Gurrin bought the block on 10 August 1905 (Ref Vol 1626 Fol 111). The size of the block is shown in the diagram from the land title. Note that if you look at a modern map there is no Islington Street.  The Newtown Project website explains what happened to Islington Street: “The north end of Islington Street connected with Gowrie Street and the Islington section was renamed Gowrie …”

So, the Gurrin warehouse that was sold in 1961 would have more or less occupied sections 4, 5 and 6 along Harold Street, as shown on the 1878 poster displayed on the sign in the park.  Sections 1 and 2 on that poster were turned sideways to face Union Street before the land was sold. One of those two sections was Mrs Hill’s property.

A much later map prepared in 1987 by the Metropolitan Water, Sewerage & Drainage Board shows the same area (with notations I have inserted in red and blue).

Land records show that the Gurrin family also owned land on Munni Street that adjoined the Harold Street properties.  The area in the 1987 map marked in blue is where Frederick and Ellen Gurrin lived, worked and raised a family. The three blocks of land are now swallowed up by a large cream coloured block of flats, named by the family as “Eddie’s Flats”, after Edwin Gurrin, though Edwin never owned the flats.

Sections 13 and 14 of section A of Deposited Plan 76 are otherwise known as 7 and 9 Munni Street, Newtown.  The land had previously belonged to widow Elizabeth Dyter, whose husband had bought them in August 1882.

Frederick had married Ellen in 1884.  On the marriage record he stated he was 22, born in Australia, and his occupation was baker.  He also stated that his mother was “Elizabeth Smith” and his father was “Frederick Moffett Gurrin”.   No birth record of a Gurrin to mother Smith and father Gurrin in 1861 exists in Australia. Frederick’s mother on his 1861 birth certificate is “Eliza” and no father’s name is given.  I have been let into the family secret – Frederick’s mother was none other than Elizabeth Dyter, nee Gurrin.  She was Elizabeth Gurrin when Frederick was born. We could say that the Gurrin extended family owned 7 and 9 Munni Street from August 1882.

The Munni Street properties were held for many years by the extended Gurrin family.

A photo of 7 Munni Street, Newtown comes from the Gurrin family archives. Lilian Gertrude Gurrin, one of the daughters of the owners, is standing in front of her parents’ house. 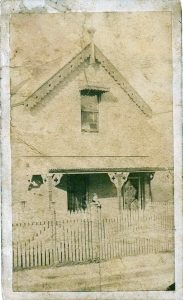 7 Munni Street with Lillian Gurrin. This was demolished for flats

Frederick Moffett Gurrin and his wife Ellen nee Cronin had eleven children.  Ellen Gurrin nee Cronin, in my opinion, was the driving force behind the Gurrin family’s successful businesses. Ellen was the daughter of an Irish immigrant couple from Limerick who arrived in Sydney on 22 August 1852. After they arrived they appear to have settled in the Redfern-Waterloo area of Sydney.  In 1855, Ellen’s parents, Martin and Ellen (senior) Cronin nee Lahiff were both found guilty of being drunk and creating a disturbance in the street and were each fined 20 shillings or 48 hours imprisonment[2].  This was not a good start to their new life in New South Wales.

Ellen junior was one of six children born to Martin and Ellen senior, between 1856 and 1870. Five of those children survived to adulthood. Both their parents, however, died in 1876 leaving children aged from 6 to 20 years.  Ellen was 12.  Oral family history tells us that Ellen was unhappy in the family with whom she was placed. Later, she became a domestic servant, and worked at “Kenilworth”, Annandale, NSW –  the house of Sir Henry Parkes.  This is not supported with documents.  It is a history passed on through the family.  I would guess that Ellen would have started looking for work as a servant at the age of about 16, thus it would have been 1880.

Ellen Cronin married Frederick Moffatt Gurrin on 8 April 1884.  She was 19 years old.  Her marriage record[3]firstly tells us she was married according to the “rites and ceremonies of the Church of England”, so she did not continue with the Catholic religion of her parents, and secondly, that her occupation was “Domestic Servant”. 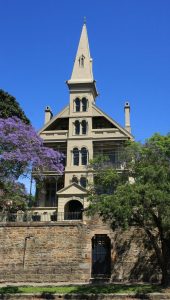 Ellen and Frederick had eleven children; two daughters and six sons survived to adulthood.  Most of the male children worked in the family owned businesses that were situated either in Munni Street or Harold Street.

For Ellen to have not just survived a difficult childhood, but to turn her fortunes around so successfully speaks to me of an intelligent and resourceful woman.

The total land area of all the Munni Street and Harold Street properties mostly owned by Ellen Gurrin (yes, Ellen, not Frederick) was 1 rood and 29 perches, or 1,745.2 square metres, or 0.42 acres. But why did the Gurrins need such a large amount of land?

There was a shed at the back of the house at 9 Munni Street, the property that Ellen Gurrin had purchased in 1925.  Arthur Reloux Rolfe, Edwin Gurrin’s brother in law made springs in the shed.  The Electoral Rolls from about 1930 describe Arthur as a spring-maker.  In 1955, the property at 9 Munni Street was transferred from Edwin Gurrin, who had inherited it, to Arthur Reloux Rolfe.

It is interesting to see a bird’s eye view of the properties from the freely available maps of https://maps.six.nsw.gov.au. In the current day view I have added the names of Harold and Munni Streets Newtown for clarity. The same view in 1943 tells a completely different story. The 1943 map shows the approximate borders of the Gurrin properties.

A descendant of Frederick and Ellen Gurrin has told me the following:

“7 Munni St. (‘GURRIN Headquarters, as we used to call it), ultimately consisted of a frontage of three (3) blocks. The rear was about the same. The entire land comprised the GURRIN Home, a large side yard at the front, which contained stables and a shed where Arthur Rolfe (Vera Rolfe’s brother (Vera was Edwin GURRIN’s wife) had a small factory where he made springs.

“Behind the stables and factory was a large paddock which contained the Storehouse of H. J. GURRIN’s Removals (the H. J. stood for Harold Joseph, who had lived in another Gurrin property at 604 King St., Newtown). The Stores comprised a two storey L shaped building.  Unfortunately I do not have any photos (wish I did) and I do not know of any that are extant. The back area of the land, where the paddock and stores were, is now a reserve, not sure of its name but it is named after some woman [sic] – it should have some reference to the Gurrin family, especially Ellen GURRIN (nee CRONIN), who was a stalwart in the family business all those years from 1890 to 1946 … The house at 7 Munni Street was demolished in the early 1970’s and there now stands ‘Eddie’s Flats’, named after Edwin GURRIN (1906-1991)”.

The flats never belonged to Edwin.  He sold the land to a developer.  He had been living in Kogarah since about 1937. Through various transactions, Edwin was the last of the Gurrin line to own the land between Harold Street and Munni Street, Newtown, from 1882 to 1969.

The Gurrin family made a large contribution not only to Newtown social life, but also to the local Newtown economy; they lived there for such a long time.  An acknowledgement of their presence in the park in Harold Street, Newtown would be appropriate.