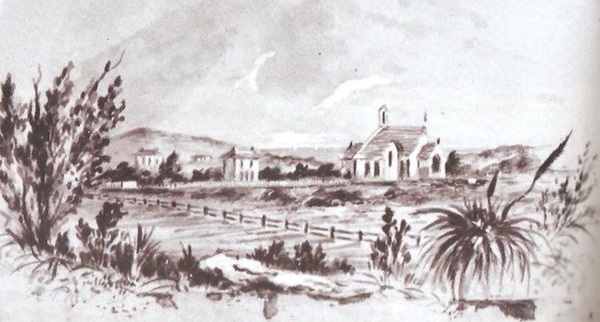 The first Anglican churches of the Randwick and Waverley districts were St Judes and St Mary the Virgin respectively. However, both churches had their origins as small stone buildings on different sites to their present day ones, with the temporary St Judes church-schoolroom at Randwick being the earliest, and thus serving both district communities for a while. Prior to 1857, local private homes were used for services, including Blenheim House, Randwick, the home of Simeon Henry and Alice Isabella Pearce, that still stands in Blenheim Street. In 1854, Simeon Pearce had applied for a Crown grant of land large enough for a church, school and residence at Randwick, and in due course two separate grants of one acre and one half acre were gazetted on 27 June 1856. These were situated at the north western corner of the present day junction of Alison Road and Avoca Street, which, at that time, were little more than bush tracks. 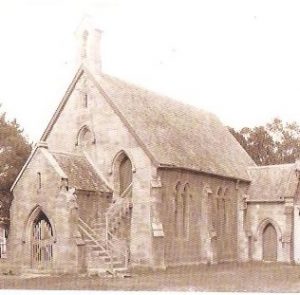 In the south eastern corner of this land, in the area now occupied by the 1893 former Randwick Post Office (now the ‘Easts’ building), a small stone-built combined chapel and school house was constructed. Dedicated to St Jude, it was licenced for Anglican worship on 15 May 1857, and the Reverend William H McCormick was appointed to care for the parishioners of the district, including the villages of Waverley, Randwick and Coogee. His stipend was initially guaranteed by the income generated from 5 acres of land belonging to Simeon and James Pearce; and was supplemented, as was usual, by various other fees and donations.

This “beautiful little building”, as it was described in a contemporary newspaper report, became known as the ‘temporary’ St Judes church. At first it could not be fully consecrated, due to debts still outstanding on its building costs. A year later, on 23 May 1858, it was consecrated – but by then, the realisation that a larger church would eventually be needed had been accepted, and the ‘temporary’ prefix remained, even in the entries of the St Jude’s Parish Registers, which began in 1858.

In the meantime, Waverley’s first St Marys’ church-cum-schoolroom had been built on the south side of Church St, Waverley, to the east of the intersection with Short Street; it was consecrated for Anglican worship on 24 January 1858. It too was referred to as a ‘temporary’ church.

The consecration services for both St Marys and St Judes were led by the Bishop of Sydney and Australasia, Frederic Barker (1808 -1882), who had arrived in Sydney to take up his newly appointed clerical duties in May 1854. Within a year or so, he had moved his episcopal seat from Sydney to the more peaceful ‘Bishopscourt’, set in bushland that overlooked Coogee Bay, so naturally he took a more than usual interest in the churches developing in his neighbourhood. Between 1858 and 1861 he used St Judes for performing clergy ordinations, refering to it as St Judes Episcopal chapel. 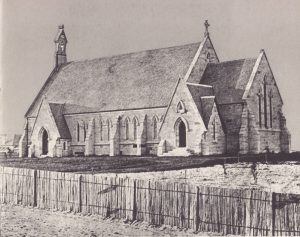 An early view of the new St Marys Church, Birrell Street, from the SE, showing the east window. Note the temporary fence and new plantings. From the cover of a booklet in the RAHS collection.

In due course, the foundation stone of the present day St Marys, as it came to be known, on Birrell Street, Waverley was laid on 6 June 1863, and the new church was consecrated on Whit Sunday, 19 May 1864.

The building for the new St Judes to the north of the ‘temporary’ church had begun in early 1861. However, due to controversy over some of the funding, resulting in two Supreme Court hearings in 1861 and 1862, the opening service for the present day St Judes at Randwick was not held until 29 June 1865. This was a great event, with two special omnibuses laid on from Wynyard!

A list of the subscribers towards the building of the first  ‘temporary’ church of St Judes at Randwick,  as recorded in the first (1858 onwards) Minutes Book of St Judes, can be found in the ‘Guides and Lists’ section of this website.

The first entries of the list of subcribers towards the building fund of the temporary church of St Judes, Randwick. From the parish Minutes Book, 1858, with the kind permission of Rev. A Schmidt.