After more than 130 years of providing hospitality, the landmark ‘Grand Hotel’ at Bondi Junction finally closed its doors for ever at the beginning of April, and has now been demolished to make way for a new apartment and commercial building. 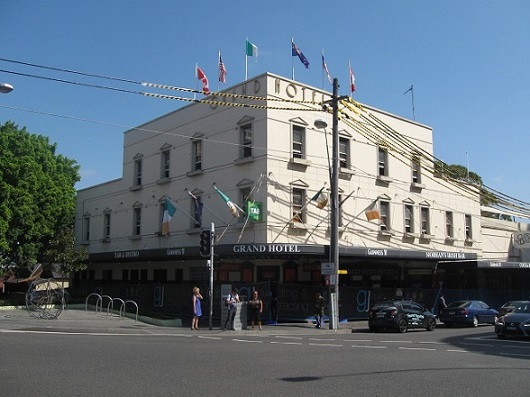 April 2018, ‘Time, gentlemen, please” – the final call for the Grand Hotel, as the barriers go up around it…

Situated prominently on the SW corner of Ebley Street and the Bronte Road and Brisbane Street junction, the white building with its square stepped roofline and colourful flags had undergone a few face lifts since it was first built in the winter of 1885. The builder, Thomas Cansdell of Waverley, bought the land for £282/17/6 in June, and just over three months later, in mid-September, he sold the land and its new building for £762/10 shillings to the very experienced and successful Paddington hotelier and chef, Mr Charles Frederick Stratton (1842 – 1898). Mr Stratton, born in Kent, England, the eldest son of a baker, started his working life as a ship’s cook, making many voyages to and from England before settling in Australia. After running a hotel in Brisbane, he married and moved to Paddington, Sydney in the early 1870s, where he ran Stratton’s Family Hotels in Moncur and then Oxford Streets. 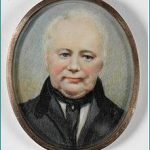 The first owner of the land on which the Grand Hotel was built was William Lawson, (1774 -1850), one of the three explorers who found the first way over the Blue Mountains in 1813, and for whom the western ward of Waverley Council was named. The block was one of three of about 5 acres each (2 hectares) that he bought in the Waverley area, to be left in trust for his daughters. After Lawson’s death in 1850, the land was managed for his family by appointed trustees, who began to subdivide the land in the 1870s. Two of the trustees were William Henry Mackenzie and George Rattray, who duly bestowed their surnames on the streets in the new subdivision.

At first the ‘Grand Hotel, Waverley’ was the only building within the NE corner lot of ‘Lawsons Estate No.3’, but a year later a large assembly hall, the ‘Athenaeum Hall’, was built by Stratton on adjacent land he had bought to the west of the hotel, facing Ebley Street – although this work caused some protests by a local resident, who complained to Waverley Councillors in July 1886 about the “inconvenience of the noise of blasting…”

Architect’s plans of 1927 showing the original 1885 building, prior to renovations. On the left is the eastern elevation facing Bronte Road (which at the time was called Cowper Street). The plan on the right is for the north-facing Ebley Street elevation. The architect was Albert Edward Bates. The Hall is not shown.

The whole complex was generally known as ‘Strattons’, and the ‘Hall’ soon became a popular venue for locals and holiday makers, hosting entertainments that over the years ranged from boxing matches to handball and baseball competitions, as well as the usual other more sedate cultural offerings. Many local clubs, such as the Waverley Cricket Club, held their well-attended Committee meetings there, confident that ample refreshment would leaven their routine business agendas!  Mr Stratton also obtained licenses for management of the catering for numerous other events, such as the Canterbury and Randwick horse racing, where the quality of his fare was deemed to be “excellent in every respect…”

By the late 1880’s many of the larger land holdings in the district originally known as Waverley had been sudivided into much smaller residential allotments, and the central area began to be known unofficially as Bondi Junction, in reference to its tram lines. In response to the increasing population of the eastern suburbs of Sydney and the growing popularity of its beaches as a leisure destination, the first tramway from Sydney that had terminated at Waverley began to be extended. Passengers could now change to lines that spread further north east, to Bondi Beach, and south towards Coogee and Randwick. 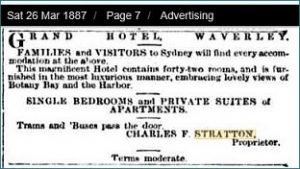 Both the tram and ‘bus (omnibus) routes passed the doors of the Grand Hotel, a fact that was mentioned in the many newspaper adverts that appeared – Mr Stratton was a great believer in the powers of advertising! From its description, the Grand Hotel certainly seemed to have lived up to its name.

In 1897, under the new management of Isaac Norrie, the ‘Athenaeum Hall’ became ‘Waverley Hall’, and so it remained for the next twenty years. In 1919 both buildings were bought by Tooheys Ltd., who had been leasing (and sub-letting) the properties since 1911. Their first formal sub-lease was issued in August 1911 to Mrs Ellen Clifford, who had been managing the hotel since 1905. She was succeeded by Ben Craven in 1918, who transferred his licence in July 1924 to William F Thomas.

In July 1927, architect Mr Albert Bates had been commissioned and he advertised for builders to tender for “additions, alterations, including bar fittings, to the Grand Hotel, Waverley”. In December 1929 an application was made to have new suspended awnings fitted. When all these upgrades had been completed, Waverley Hall had disappeared, absorbed into the newly refurbished and extended Grand Hotel.

1929 was also the year in which the Boosuit family took over the management of the ‘Grand’, and it was in their care for over 30 years; first licensed to William John Boosuit, then to his only son, Derrick Ivan, and finally for a few years by Derrick’s widow, Phyllis (nee Valentine), until she retired in 1961.

During the Boosuit’s time, Tooheys mooted several plans for refurbishing the Grand Hotel. The most drastic was in June 1946, when the Sydney Morning Herald reported that the whole complex was to be demolished and rebuilt! The estimated cost was £35,000.

However, this ambitious undertaking seems to have been shelved, as in 1954 new plans were submitted for a ‘makeover’ that show the old hotel building largely intact, albeit minus the attractive first storey balconies. These may have been removed during or soon after the 1927/28 alterations, thus resulting in the need by December 1929 to have the new suspended awnings fitted.

In the intervening decades there have no doubt been many other upgrades to suit the changing clientele and comply with building and other regulations, but externally the Grand Hotel has been a constant landmark on the local scene. It is pleasing to see that the plans of new developers will retain the skyline and land footprint of the late ‘Grand Hotel’, with a design that reflects and respects those of their predecessors from 1885 onwards.

Of the author’s grateful appreciation to Waverley Local Studies Library for allowing the use of the illustrations of architectural plans of the Grand Hotel, which are in their unique collection of hundreds of plans of Waverley buildings that date from the early 1900s; also for other assistance with researching this article.

The Hotel Conversation, 4 December 2017  (Artist’s impression of the new development)