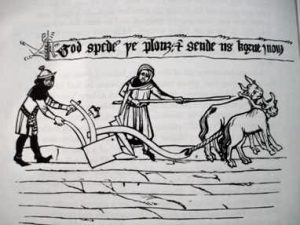 A medieval ploughman & his wife at work in the field

Measuring land for ownership (and taxation) is a very ancient concept, as is the word ‘acre’, which occurs in many old languages and translates as ‘open field’. The area thus described was originally a strip of land (a long furrow, which gave rise to the word furlong, an old measurement of length) that a ploughman and his yoke of two oxen could turn over in an average day’s work – a strip being easier to plough than a square, as there were fewer turning points required.

Acres.  Later an acre was more accurately measured as an area which is equivalent to 10 chains by one chain. A chain is now standardised as 66 feet (20.18 m), so the actual area covered by an acre is 660 feet by 66 feet, which (to save you the maths) converts to near enough 4,048 square metres. To visualise this, a professional football (soccer) field covers an area of two acres, so one team’s half is an acre. Thus a hectare, which is approximately 2 1⁄2 acres, takes up both halves of the playing area, plus the land around it between players and spectators.

Roods & perches.  These are subdivisions of an acre. There are four roods in an acre, and in turn a rood contains 40 perches. As a rood is a quarter of an acre, it contains 1.012 square metres – about the size of two tennis courts. Each of the 40 perches in a rood thus consists of just over 25 square metres – the size of one of the net-side playing areas of the tennis court.

This is why on a land survey map that gives the dimensions of each parcel’s area of land, you will never find more than the quantity of 3 roods or 39 perches noted – which is helpful to know if the numbers are hard to decipher. As a further example, if a landholder owned 4 acres and 3 roods, and then bought a further rood, he (or she) would then own 5 acres in total. Similarly, should the owner have 4 acres 3 roods and 39 perches, only one extra perch would be required to make up the 5 acre block, as the extra perch would give a total of 40 perches (a rood), which in turn would make a total of 4 roods (an acre) to add to the 4 acres.

The relative sizes of each unit of measurement are shown in the diagram below.

One (1) chain is 66 feet. Each chain contains 100 links, each measuring just under 8 inches (7.92 inches). Old plans may show measurements in chains & links, or feet & inches (there are 12 inches in a foot). To compare plans with a modern map, the given dimensions must be converted to a metric equivalent.  To do this, convert the feet and inches to an approximate fraction, then multiply this by 0.305 to find the equivalent in metres.

For an accurate conversion of all measurements, there is a calculator on the Australian Government’s National Measurement Institute’s website, 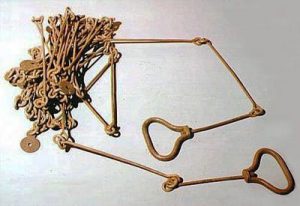 Invented in 1620, early surveyors used this metal chain, with the help of a ‘chainman’, to establish horizontal linear measurements. Each chain measured 66feet, made up of 100 links, each 7.92 inches long. Brass tags with different notches were used to indicate every tenth link. The chain was stretched out from the ‘point of commencement’, in a noted compass direction, and pegged at its other end. The chainman then gathered up the chain from the starting point, and carried it to the pegged end, then on to the next point. Sloping ground had to be measured in small horizontal sections.