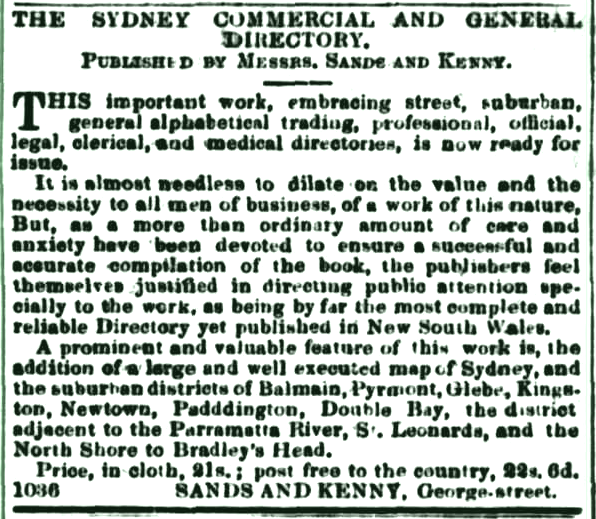 The following review of the first Sand’s Directory to be published for Sydney, in June 1858, appeared in the Sydney Morning Herald on Saturday 17 July 1858, p.4.

“ How do all the people in Sydney get their living? This is a question which may often awaken the curiosity of an observer who remarks the congestion of population in the heart of the colony. With an enormous territory, part of it even not explored, one-fifth of the inhabitants cluster round the metropolis, and bid for the possession or occupation of little allotments and confined dwellings.

The Sydney Directory just published by Messrs. SANDS and KENNY, gives us a little insight into the occupations of the people, at least of those openly engaged in trade, and who inscribe their professions on their door-posts. Sydney has come of late years to mean a great deal more than Sydney. The city proper is surrounded by far-reaching suburbs, whither the artizan and the clerk, driven by the high city rents, seeks a cheap residence within reach of his daily duties, and where the wealthy citizen finds a retreat from the dust and tumult of crowded streets. So that in compiling a Sydney Directory, the publishers have found it necessary to make a pretty wide circuit, and in ” beating the bounds,” have had to go from Randwick to Camperdown, and from Cook’s River to St. Leonard’s.

The great function that Sydney performs for the colony is that of being the entrepôt of its commerce. It is also the political metropolis, and the resort of hundreds who, having made their fortunes, choose to reside where the con-veniences of living are most multiplied, and who prefer the society and amusements of a city to rural pleasures. But commerce is the great business of Sydney. Hither come the foreign imports for redistribution over the whole territory. Hither, too, comes the colonial produce that is ready for exportation, and this transfer of merchandise gives employment to many hands.

Of merchants proper, there are no fewer than 111, besides 31 who call themselves, by prefer-ence, importers, being mostly agents for the introduction of special articles and not engaged in general trade. There are 8 Custom House agents, who will attend to the entering of goods for all who may need their services.

There are 85 brokers, who run about town and find customers for goods as fast as they are landed, or at least who try to do so, and who thus help the merchant and the importer to dispose of his wares, as well as accommodate the purchasers by finding for them the goods they want. If the brokers cannot sell the goods, 40 auctioneers stand ready in their rostrums, twiddling their little hammers, and discovering the highest bidders. In every auction room are to be found a score or two of dealers men who will buy anything, on speculation or commission. They haunt sales everywhere, and the tones of their voices, and the flavour of their wit are known familiarly to all the knights of the hammer. What they do with all the odds and ends they buy is a mystery to everybody but themselves, nor is it less a mystery how so many of them manage to make a living, for this trade numbers 240.

Besides general merchants and importers, there are wholesale dealers in special articles. Thus there are 25 warehouses where the shop-keeper may suit himself, at a moment’s notice, with any article he may not happen to have in stock; 68 corn factors and dealers in colonial produce, who receive consignments from farmers up the country, and negotiate the sale of it for them; 37 timber merchants, six of whom have steam saw mills; 12 wool-brokers, who are ready to ease the squatter of the risk of shipping his wool; eight potato merchants, and 11 coal  and fuel merchants; there are 13 millers, besides 6 who prefer to call themselves flour merchants, the mere grinding business being quite subordinate to the more extensive and important operation of speculating in flour. There are 32 wine and spirit merchants.

In the order of distribution, the shopkeepers come next to the merchants, under which general denomination are included firms who import on their own account, and transact often a wholesale business to a far larger extent than many who style themselves merchants, and the little retailer in the suburbs, who lives almost from hand to mouth.

The city commissariat being of vital importance, let us see how many persons are engaged as retail purveyors. To begin with, there are 287 grocers, 193 butchers, 97 bakers, and 84 greengrocers. There are 32 confectioners to tickle dainty appetites, and 10 poulterers to supply those who can afford roast turkey or boiled chicken. Twenty-two dairymen perambulate the city twice a day, with milk, all (of course) fresh from the cow. There are six fishmongers to supply those who are tired both of flesh and fowl, or who like a change of diet. This of course does not include the peripatetic fishmongers who disturb with their cries our morning slumbers, and who, to judge from the noise they sometimes make, must number sixty-six rather than six. We have one item left on our list of purveyors, and we have kept it to the last for the sake of our friends the teetotalers. All those enumerated above sell (or are supposed to sell) good food, though the late revelations before the select committee of the Council would make one occasionally a little suspicious about it. But the class we are now to mention sell what the anti-Bacchites call poison. How many publicans are there in the city and its suburbs? Only 487!  That is to say, they are nearly five times as numerous as the bakers, between three and four times as many as the butchers, and more numerous by 200 than the grocers. There is a comparison that will do for the first lecture in the new Temperance Hall.

Besides having something to put inside the body, civilized human nature requires something to put outside as well. Walking seems to be the most destructive exercise to clothes, for there are no fewer than 307 shoemakers. Tailors find employment to the number of 193. Of drapers there are 127, and hatters 15. Ladies, do you want any dresses made up? There are 43 dressmakers, besides 33 milliners, who are ready to oblige you.

Shelter is the next want to clothing and food, and to provide this gives employment to a great many tradesmen, artisans, and others. There are 54 architects and engineers, who will draw you a design from a cottage to a palace. There are 128 builders, who will contract to erect it according to specification. Carpenters, to the number of 241, stand ready to do the woodwork; 134 masons are ready if the walls are to be of stone; 44 quarrymen are at hand to prepare the stone; and 8 brickmakers, if bricks are wanted.  56 men may be had to do plastering work, and of painters and glaziers there is a choice of 147.  When the house is built it must be furnished, and the service of 108 upholsterers are available; 89 smiths and l8 brassfounders are prepared to do anything that may be wanted in their line. To furnish the kitchen with utensils, 49 ironmongers display their stores; crockery may be selected from 27 different shops.

There are many other occupations classified in the work before us, which we have not space to refer to. Those who are curious in the matter we must refer to the book itself, which is well arranged, well got up, and in every respect creditable to the publishers. No directory can be perfect, where society is so shifting as it is in our colonial cities. But though errors of omission and commission must abound in such a work, the great bulk of it correctly represents the occupations and residences of the population. To commercial men such a manual is invaluable, and commends itself. We ought to add that the book is illustrated by a large and excellent map of the city and its suburbs ”.